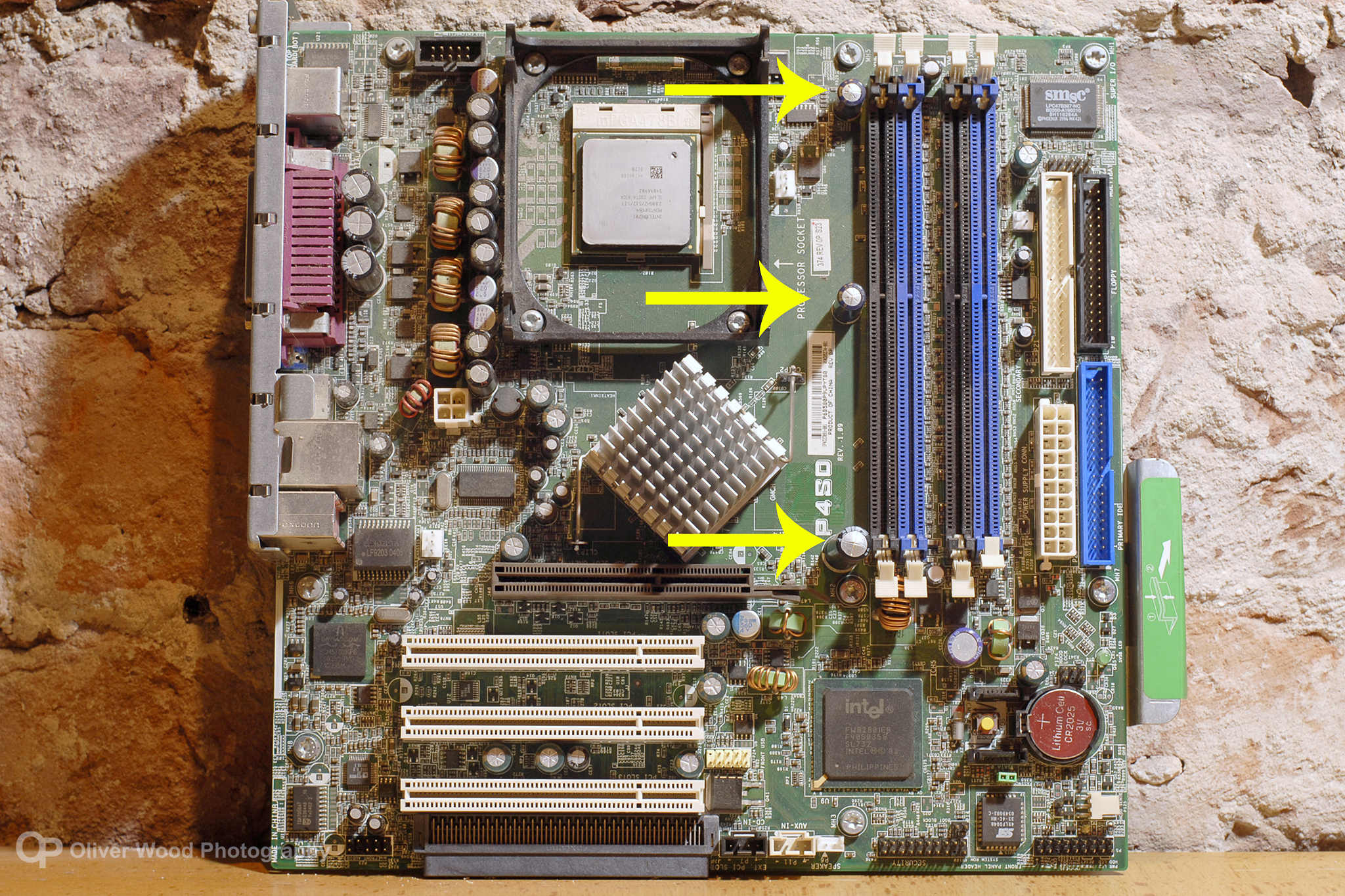 For this article I am going to delve in to a bit of “hard tech” and discuss one of the most common causes of hardware failure, blown capacitors! All of the components in your computer will make use of a relatively large number of discrete capacitors.

There are many types of capacitor with a variety of different uses, but the type which is of most concern to us is known as an electrolytic. A more up to date counterpart is the solid, solid state, or dry electrolytic capacitor, but more on that later. In almost 80% of cases a hardware fault will be due to the failure of an electrolytic capacitor. Unlike semiconductors (transistors etc.) this type of capacitor has a finite lifespan which is much SHORTER than any of your other MOBO components!

These little beasties are quite easy to identify and come in two distinct package styles. The older (more problematic) type is known as a “wet” electrolytic. This type contains a liquid electrolyte impregnated into a non conductive medium tightly rolled between foil sheets which form the plates of the capacitor. These older electrolytic caps take the form of an aluminium can covered with a plastic jacket in a variety of colours, depending on manufacturer. The cover will include info about the rating, operating voltage and polarity, or which contact is connected to the positive and negative sides of a power rail respectively and this is very important. Polarity is also often marked on the capacitor mounting position on the motherboard or any other circuit board. 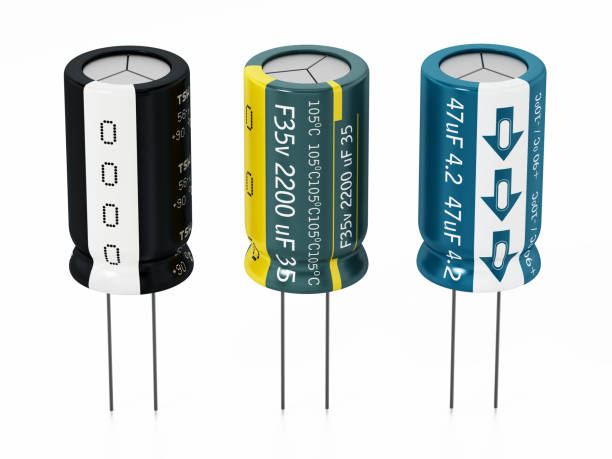 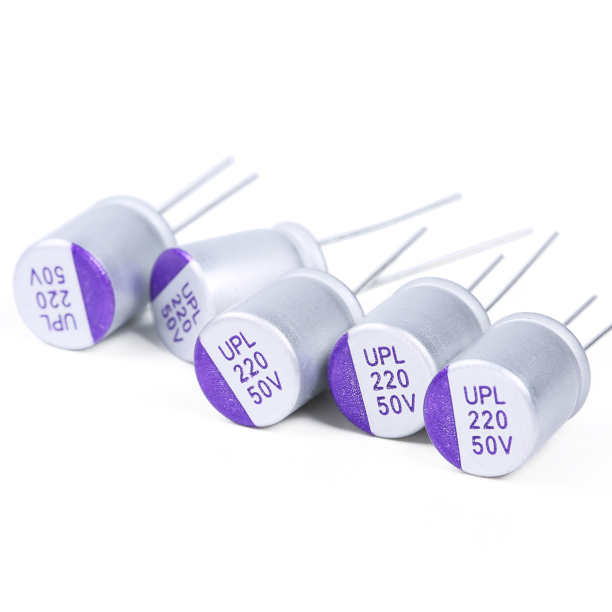 Right: modern dry or solid state caps, these have replaced wet electrolytic types on all modern MOBOs and GPUs, particularly for the most demanding applications. They last much longer than wet electrolytic caps but still have a finite life span. For perspective, the semiconductors on your MOBO, CPU, PCH controller and discrete transistors and regulators, will have an almost infinite lifespan if treated properly. Capacitors and other components are much more likely to fail early on motherboards that are being significantly overclocked.

Note that the old style wet electrolytic is still commonly used in PSUs (power supplies) as they are still the best kind of capacitor where very high values of capacitance are required at higher operating voltages. More about this later.

What do capacitors actually do?

Think of a capacitor as being a bit like a bucket with a small hole in the bottom. Now imagine this bucket is being filled with a high capacity fire hose or a waterfall … get the picture? Basically, a capacitor is a device that can hold charge and release it slowly. It may also be helpful to think of a capacitor as a kind of battery that can charge up almost instantly and also dump all of its charge instantly, or at a rate dependent on the resistance of a load; the small hole concept relates to this.

The amount of charge a capacitor can hold is measured in Farads but in all practical cases these are micro Farads, 1 micro farad is one millionth of a Farad and is represented by the symbol μF

Capacitors also have a voltage rating, when replacing capacitors this rating must be matched or increased (by a small amount). Never replace a capacitor with one having a lower voltage rating as this will lead to a messy explosion!

What are they doing on my MOBO?

They are used in many different electronic applications but most of the electrolytic capacitors on a computer mobo are involved with power control, conditioning or smoothing. They are like buckets filling with water quickly and releasing it at a steady rate to maintain consistent voltages despite fluctuations in other parts of the system or mains power supply. They are very important components in the MOBO’s power distribution to your CPU, RAM, (PCH) and System Agent (SA). If any of these capacitors fail or change value then this can have significant impact on the performance, stability and behaviour of your system.

We are talking about easily replaceable parts costing pennies whose failure causes major system faults that some people will find catastrophic and reason to purchase a brand new system costing thousands of pounds!

What are the symptoms of bad caps?

The PCH issues above will also appear in older Intel boards with failing power caps for the North and South bridges on the MOBO.

Lets have a quick look at my example. This is a very old 32bit Intel MOBO with a Pentium 4 single core CPU (cooler removed) with only 512MB of RAM. Yes, it still has a use; I have been running lightweight Linux distros on it for a couple of years.

The symptoms: Booting to BIOS no problem, Memtest86 ran through at least two full passes with no errors, BUT it wouldn’t boot into the OS (Lubuntu). At first I thought it was a software issue so I tried to install other distros on the system, Bodhi Linux and even Alpine, but got the same behaviour. Next I did a full test on the SSD – no issues again.
Now I was beginning to suspect either the PSU or the CPU was at fault. A test of the PSU and even a swap out with a known good one – still the same problem, reset BIOS – nope, we still have a problem.

On further inspection of the MOBO I noticed these three capacitors all had bulging tops. This is a very bad sign and indicates a failure state. The internal electrolyte is cooked and partially evaporated. Electrolytic capacitors of this type are actually designed to fail dramatically but safely with an explosive release of pressure through the deliberately weakened top of the can! 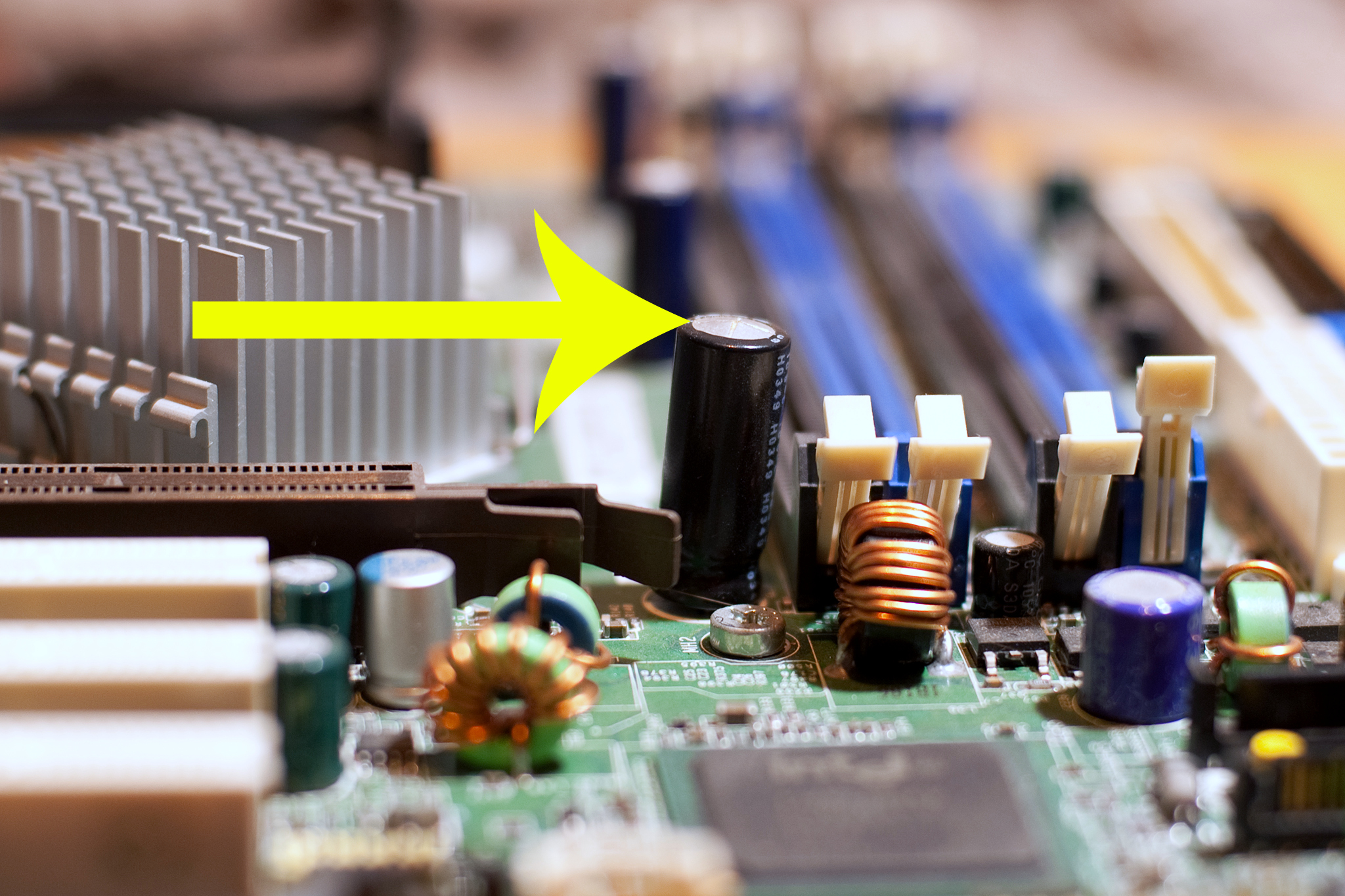 All of these capacitors will now be well out of spec. Some can even fail as dead shorts, others will fail “open circuit” and not conduct anything, though this is rare. So I began to suspect that these little guys were causing all of my problems. I’m not sure if these caps are on Vcore but they are rated at 6.3V so they will be associated with one of the 5V logic power rails. They could be associated with any of the three main power requirements on the board. The only time you can be certain a cap is on Vcore is if it is in close proximity to the CPU socket or rated at more than 12V for the supplementary input to the 3.3V / 1.8V regulator for the CPU. 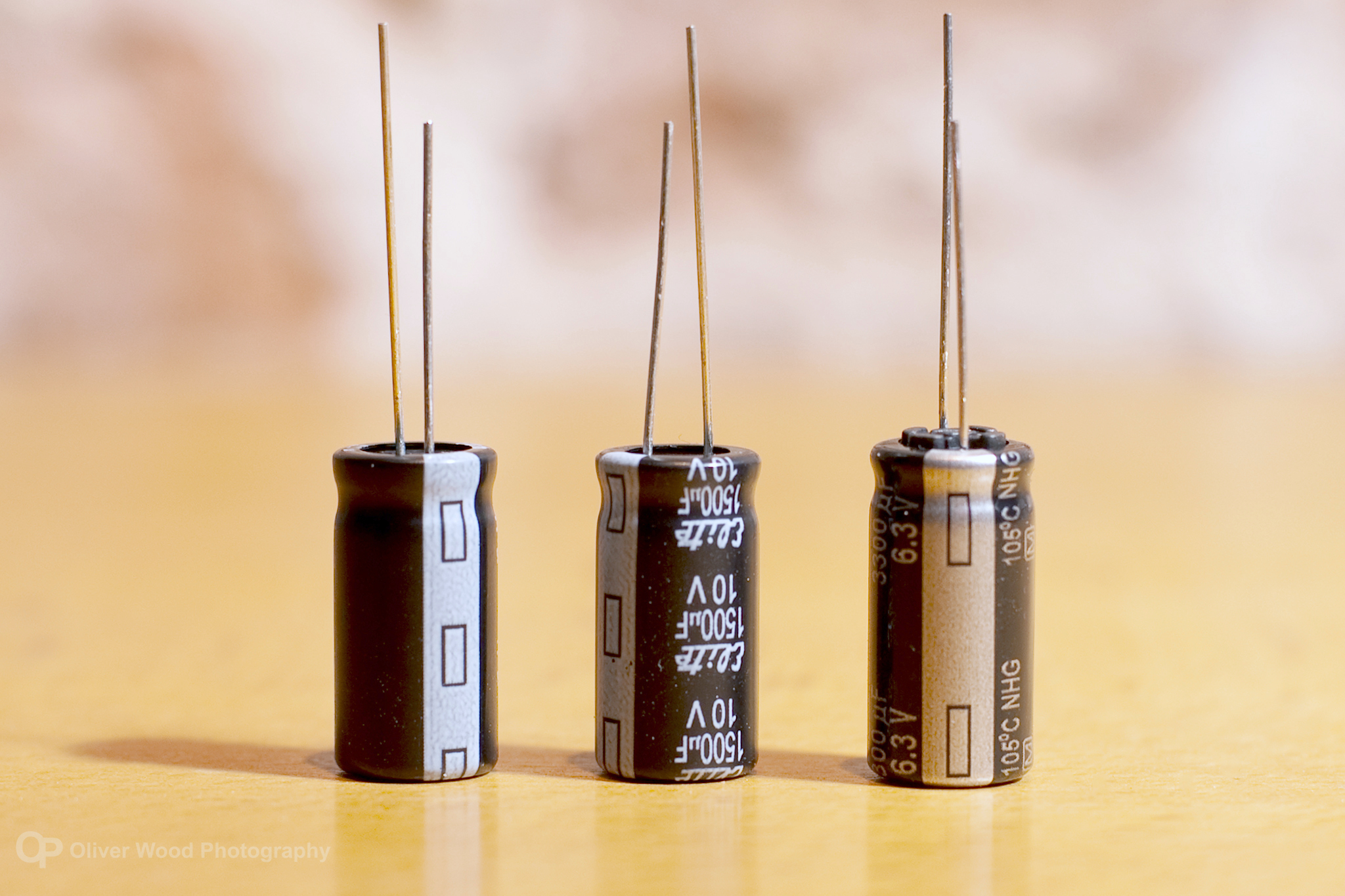 The system is now working perfectly again and running a 32bit version of Bodhi Linux with no issues! I guess I will be able to get a few more years service out of this old MOBO until we no longer have any new 32bit Linux distros. Though I am writing this blog on my trusty little Raspberry Pi 🙂

A word of Warning

I mentioned PSU capacitors previously. It is possible to recondition computer PSUs and as with motherboards 95% of failures will be due to cooked electrolytic caps. However, this repair should only ever be carried out by an electrically competent person. Capacitors in the PSU can hold enough charge to give a lethal shock and the system is a mains voltage operated switch-mode converter with no isolation transformer. Mistakes can easily cause fires, explosions or send lethal voltages into your computer.

Set up in 2016 by Oliver Wood, Prestburyweb provides support in all aspects of web based media to business & organisations across the UK.